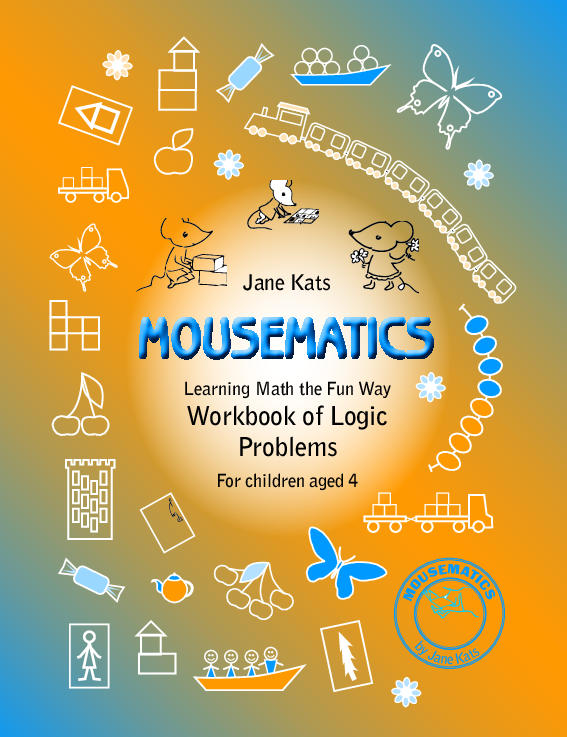 Mousematics – Learning Math the Fun Way is a series of workbooks for children aged 4 to 7. This is the first workbook in this series. What makes it so unique? First of all, these workbooks have a slightly different purpose than other math books for preschoolers. The main purpose of the Mousematics series is not to teach preschoolers to count (this is something every child will inevitably learn sooner or later), but to spark the children’s interest, to invite them along on an exciting journey into the world of logics and mathematics. This is why the tasks in these books are made to be interesting, above all. Four years is the age when many children begin to arduously count everything around them and look for familiar letters and numbers; and this book is intended to support this interest. Children will enjoy counting bunnies behind fences and helping a mouse avoid being eaten by a cat; and bringing a truckload of goods from the warehouse. Secondly, we tried to make sure the tasks a created in a way that children do not form stereotypes that so easily sprout and thrive from standard workbooks. What are these stereotypes? There is always a solution, and there’s always only one (this workbook sometimes allows two correct solutions, or no solution at all – for example, when there are only two floors in a building, and the child is asked to find the third one) The dots that have to be counted are always round, and the grid cells are always square (we sometimes have the dots replaced with pluses or triangles, or any other shape. And instead of squares, we might have diamonds or trapezoids) You can only count from left to right (in this workbook, there are different possible ways) If there are two columns and a line needs to be drawn to connect identical objects, the paired object will be found in the second column (in our book, it might be in the same column, or there might be no pair at all) Five is when five dots are in a row, or when they are arranged with four in the corners of a square and one in the middle, like on game dice (we have five objects shown in dozens of different patterns) “Come on, I’ve done this task before!” (In this book, the tasks of the same type get gradually more complicated) As far as stereotypes go, four-year-old children as much easier to work with than first graders, because it is harder to break deeply rooted stereotypes than to prevent them from developing in the first place. Thirdly, we have to remember that the foundation of mathematics is not the actual counting, but the ability to think logically. This is why our exercises are aimed primarily at developing logic skills: the ability to identify attributes, as well as the ability to find identical objects or to find the “odd one out” among objects, based on shape or color, etc. Sometimes children inadvertently mislead adults by quickly learning to say the tongue twister “one-two-three-four-five”, or even up to ten. It doesn’t really mean that the child has learned to count. Often even the children who say this tongue twister are not very confident in counting objects, and cannot always glance over and take in a group of objects and immediately understand how many there are. Another widespread adult misperception is the myth that any idea can be explained to a child, and if the explanation is simple enough, then the child will immediately grasp the concept. There are concepts and skills that have not yet been “owned” by children. For example, in order to find out how much 5 + 1 will be, many children put a finger next to their whole hand, and start counting the five hand fingers over again; and it is useless to try to talk them out of it. It means that the skill of computing operations has not been completely formed yet; it needs time and various training exercises aimed at adopting, assimilating that skill – at making it their own. This is exactly what such workbooks as this one are needed for.